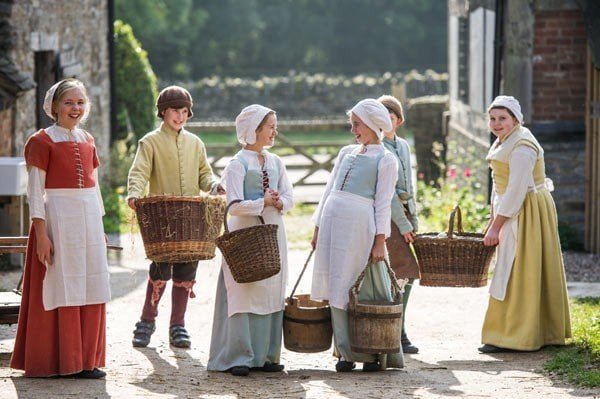 Summer is the time for festivals, pageants and outdoor performances of various plays and each year there is always a good selection of Shakespeare’s plays being performed at stunning locations, many outdoors. What better way than to enjoy this warm weather than an evening of magic watching world class actors perform one of the Bards famous plays. Take a picnic if permitted and sit back and relax. It is a great way to help your children who maybe studying Shakespeare as part of their curriculum to see the relevant play in action and to discuss the performance afterwards as a family.

I recently saw Macbeth at Verulamium Park in St Albans, Hertfordshire, and it was stunning production. Set in a roman amphitheatre, it was a perfect setting and very atmospheric. There were plenty of families there too, and the  audience watched entranced as the sun slowly disappeared and the moon and stars appeared.  Above all the actors were first class and the ticket prices sensibly priced at £19 a seat.

Last week I went to Shakespeare’s Rose Theatre in York to see The Tempest, equally good with wonderful actors, but the tickets were an eye watering £60 + for a similar seat. Together with booking fees an enjoyable evening was expensive one, reflecting West End prices and far higher than other regional companies charge. The actors were playing to a half empty house, so disheartening as they act two plays each day. Perhaps Lunchbox Productions who is the company behind this production should take a look at their pricing structure, and offer discounts for booking more than one play?  There are four in total, Hamlet, The Tempest, Henry V and Twelfth Night.

If you are visiting York this summer it is still worth a visit but perhaps take a rug and book to stand/sit in the pit at the front of the stage. You get a great view and interaction with the actors and the tickets work out at £15.25 including booking fees.

Lunchbox are playing at Blenheim Palace for the first time this year as well,and performing four of Shakespeare’s plays; Macbeth, A Midsummer Night’s Dream, Richard III and Romeo & Juliet.  Here the tickets are selling well, perhaps because it is the first time they have performed at Blenheim or that Cotswold folk are not so canny as Yorkshire men with their money!  There is no standing pit either, the cheapest tickets are high up in the Gods at around £20.

For A Great Family Day Out or Week Away

But for the real deal there is only one unique Shakespearean destination worth visiting this summer which is Stratford Upon Avon where the famous Bard was born, lived and is buried. You can visit the house he was born in, the school at which he was educated, the cottage in which his wife, Anne Hathaway, lived before their marriage and Holy Trinity Church, where he was laid to rest. Home of the Royal Shakespeare Society, there are, naturally enough, various theatrical performances held throughout the year, with large scale birthday celebrations and processions held each April.

(A family ticket to Shakespeare’s Houses –  five historic properties including Shakespeare’s Birth Place, Hall’s Croft, New Place, Anne Hathaway’s Cottage and Mary Arden’s Farm and at £59.50 for a ticket represents great value for money.  There is plenty to see and if you can’t manage to explore them all in a day why not take your time visiting them over a few days or even over a series of visits as your ticket lasts a year).

A series of performances in the beautiful surroundings of Shakespeare’s family homes. Come and see performances of A Midsummer Night’s Dream in the beautiful gardens at Anne Hathaway’s Cottage, or at Mary Arden’s Farm. Performances of Much Ado About Nothing can be enjoyed under the Mulberry Tree in the garden at Hall’s Croft. Ticket prices are approximately £15.00  For more information, click here: https://www.shakespeare.org.uk/visit/whats-on/summer-outdoor-theatre/

A unique kind of treasure hunt for children and adults alike.

Follow artist Francesca Millican-Slater’s unique treasure hunt around the 9-acre site. Discover hidden nooks and crannies on the site of Anne Hathaway’s Cottage by finding individual objects that tell you stories of who has been here before. Pick up clues to unlock the stories of visitors from the past and present; Second World War sweethearts, migratory birds, writers of letters and famous names.  Engage in actions and activities as you make your own journey; write a story, exchange an item, and act out a miniature play. Finish your adventure by writing or drawing your story on an ornamental apple and hanging it on a special tree that will grow with visitor apples throughout the summer. All activities are included in the entrance fee so if you have a valid ticket, you can come back for free!

The first wheat harvest of the year

Celebrate a traditional Lammas Day with our resident Tudors. Make your own salt dough Lammas loaf, enjoy Tudor storytelling, music and more. Lammas, or “loaf mass”, celebrates the first wheat harvest of the year. On Lammas Day a special loaf of bread was baked and taken to the local church to be blessed. The loaf was then brought back to the farm and broken into four pieces. A piece was placed in each corner of a barn to ensure the newly harvested grain was protected. All activities are included in the entrance fee so if you have a valid ticket, you can come back for free!

Stratford Upon Avon itself is a lovely town to visit and there is so much to see in the area that it makes an ideal base for exploring the town and surrounding countryside.  Take a trip on the river or visit Stratford Butterfly Farm and to experience Elizabethan Life visit Tudor World.  Nearby is Charlcotte Park owned by the Lucy Family and is a stunning Elizabethan House set on the banks of the River Avon. Allegedly this is where Shakespeare poached deer as a boy and was hauled up before the first Sir Thomas Lucy, the local magistrate.

Stratford Upon Avon has a good variety of accommodation from hostels to five star hotels to stay in depending upon your budget.

Other Locations in England Worth Visiting

If you cannot make it to Stratford, York or Blenheim to see a play there are plenty of other venues around the country where you can see Shakespeare play being performed this summer.

The reconstruction of the Globe Theatre, where many of Shakespeare’s plays were performed in the 17th-century, will be hosting several of the Bard’s finest works this summer, including:-

From 23 August until October 12  Bartholomew Fair is playing at Sam Wanamaker Playhouse.  Tickets start at £12.50 including booking fee.

The Stamford Shakespeare Company situated at Tolethorpe Hall has won international acclaim for the productions they perform.  Every summer over 34,000 people attend their summer performances at Tolethorpe Hall, Stamford.

Performances take place on an open air stage set within an enchanting woodland glade facing a 600-seat, raked, and permanently covered auditorium. The Stage described it as “one of England’s premier alfresco theatre venues” and The Sunday Times described a visit here as being “one of the finest things to do this summer”. In addition to the recognised high standard of performances the theatre is known for the quality of all its facilities, making it one of the finest open air theatres in Europe.  Tickets are £14.00.

The Lord Chamberlain’s Men,  named after Shakespeare’s original troupe of travelling players, are an acclaimed theatre group that tours the country each summer and are playing at over 30 locations including Dunster Castle, Kingston Lacy,  Killerton, Newby Hall, Chatsworth House,  Arley Hall and Gardens, Kenwood House and many more venue across the country.  They invite you to join them this summer for Shakespeare’s enchanting comedy, A Midsummer Night’s Dream.  Like the original troupe, they have no women in the company so the all-male cast play both the male and female roles. Tickets start at £15.00.

Get Creative this Halloween

Autumn is a great time for looking at how nature is changing the foliage around us. As a result of the long hot spells we experienced in the spring combined with the damper months of summer, this season is expected to be even better than usual with a spectacular display…

The Online Discover Yorkshire Days Out Autumn 2020 Guide is here! We’ve done all the hard work and rounded up all of the best things to do and places to visit with the kids this Autumn and put in a beautiful little Online Guide. We’ve been hard at work…

Stratford-upon-Avon Butterfly Farm is celebrating after scooping two recent awards especially in such difficult and challenging times. The popular attraction has been awarded the Trip Advisor Travellers’ Choice Award 2020 and been awarded 1st place in Stratford in Bloom within the Tourism Properties category. Although the Butterfly Farm was the…